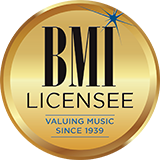 E-chords is a BMI licensee under an agreement that guarantees us to make non-dramatic public presentations of BMI works incorporated into audiovisual programming in the United States.

Below is a transcript of some of the relevant clauses in the aforementioned agreement: